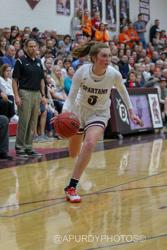 Emily Cavey’s high school career can be compared to what we have experienced this spring with Covid-19 restrictions. The optimism and excitement of a state tournament experience cut short by events outside our immediate control. A spring sports season to refresh our energy and enthusiasm that never got off the ground.

Emily began her athletic career at Berthoud High School with the prospect of multiple Division 1 scholarship opportunities because of her outstanding performance in youth summer basketball tournaments. She received All-State recognition as a sophomore after the 2017-2018 season. In the track season that same year, Emily finished 2nd in the discus at the state track meet. What a great way to end her athletic year and Emily was excited for another successful summer basketball season.

That is when Emily’s athletic career would hit its first obstacle. In the first quarter of the first game that summer, Emily landed “differently” on a layup drive and couldn’t continue playing despite her best effort to stay in the game. She had torn her anterior cruciate ligament (ACL) and was facing a lengthy six-month rehabilitation process. This recovery was daunting and had her reflecting on her goals and outlook on school, sports, and interacting with others. Emily realized that others could not see the pain she was in and the determination that was inside herself to make a complete recovery from her injury. She changed her outlook towards others by understanding that she could not know what others were going through and the struggles they faced on a daily basis. Her daily routine of school, rehab, and family kept her focused on the positive aspects of making a complete recovery for her junior year. Emily became involved as a Peer Support Counselor, member of the Link Crew, One Love’s Teen Dating Violence program, and SafeTALK Suicide Prevention.

During her rehabilitation process, Emily shared her knowledge of ACL injuries and rehab by introducing exercises to her teammates to help prevent them from suffering an ACL injury. She stayed engaged with the team by becoming an ‘assistant coach’ and offering advice to her teammates on the bench.

The rehabilitation process was almost too much for her to handle, but Emily stayed focused on helping her teammates. She was determined to be in top shape when she finished her rehabilitation so she would be ready to compete at her best level. Her best proved to be pretty good as Emily finished the 2018-2019 basketball season and then qualified for the 2019 state track meet in the discus before suffering a broken wrist the week before the state track meet. This was another obstacle that Emily would have to face, and it limited her ability to play basketball during the summer season.

A year removed from her ACL and hand injury Emily had the senior basketball season she had been hoping for. She led her Berthoud Spartan team to a final four appearance in the 2019-2020 state tournament before an overtime loss to Mullen cut short their run to a championship. Her comeback from her injury was rewarded with a 1st Team All-State selection. Being selected to play in “The Show” basketball all-star game helped prove that Emily was back at the top of her game again.  Emily reflected that her fight to come back from her injury gave her an idea of what struggles Freddie Steinmark must have experienced as he waged his fight against cancer. “He struggled with an awful injury that led to his death and even though I cannot relate to something so tragic I can relate to the loss and fight for the game.”

Emily made sure that her arduous rehabilitation did not cause her academics and community service activities to suffer. Emily maintained a top 25 class ranking, carried a weighted GPA over 4.0, and graduated with multiple college credits from AP courses.  She served as committee chair as part of National Honor Society and in multiple leadership positions for Future Farmers of America (FFA). Her participation in 4-H got serious as she has held all executive leadership positions and been multiple time swine, sheep, and overall showman.

Emily was very appreciative when told of her selection as the 2020 Freddie Steinmark Award winner. She was traveling with her family for a trip to Yellowstone National Park. “Wow! This is awesome!” Emily exclaimed. “I can’t thank you enough for believing in me and appreciating my story. I have learned about perseverance and patience through all of this.” Emily will take the lessons she has learned with her to Tarleton State University in Stephensville, TX this fall as she will help launch a new Division I women’s basketball program at the school.

The Steinmark Award was established in 1972 and honors Freddie Steinmark, who excelled in football, basketball, and baseball while attending Wheat Ridge High School in the 1960s. He was also an outstanding student and was active in several school and community-oriented endeavors before attending the University of Texas, where he helped the Longhorns to the national football title in 1969. Freddie died from cancer in 1971 at the age of 22. Students athletes nominated for the award must be seniors who have maintained a GPA of at least 3.0 and participated in at least two varsity sports, having earned at least All-Conference in one sport and All-State in another.

Emily is the 48th winner of the girls Steinmark Award since it was first presented to girls in 1974. The first girl to win the Steinmark Award was Anne Vento of Pueblo Centennial in 1974. There were two winners of the award in 1984. Cavey will be honored as part of the CHSCA All-State Games hosted by Colorado State University - Pueblo. The All-State football game is planned for July 17, 2020. Emily will be joined by Ralston Valley’s Caleb Rillos, who will receive the boys’ Steinmark Award.

In 2019, Kain Medrano of Pueblo East received the boys’ Steinmark and Tess Hornung of Kit Carson was the recipient for the girls.