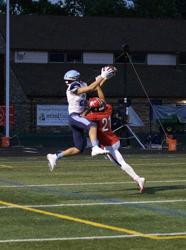 Caleb is the 51st winner of the Steinmark Award since it was established in 1972 (there were two winners in 1976 and 1979) and he continues the proud tradition of Steinmark Award winners. Caleb learned first-hand about Freddie Steinmark from his father, Matt Rillos, the 1996 Freddie Steinmark Award winner from Golden High School. The elder Rillos passed on stories about the accomplishments of Freddie Steinmark from his glory days in the mid-1960’s at Wheat Ridge High School and the hard work it took to get a scholarship to play for the Longhorns. There were stories about Freddie playing in the 1969 ‘Game of the Century’ against the Arkansas Razorbacks and then a week later being diagnosed with osteosarcoma in his left leg and the immediate amputation of the leg.

Most importantly, Caleb learned of the hard work and dedication it would take in the classroom and his community to really stand out as a Freddie Steinmark Award winner. Caleb wrote, “As a kid, (my Dad) told me that in order to get this award you had to be a person like Freddie Steinmark. You had to be more than an athlete. You had to be a good student, a good citizen, and a good leader. Freddie Steinmark was a special athlete, and a player like him is very rare. This award is very special to me, not just for what it stands for but also because my dad was a winner. To be nominated is an incredible honor. To win, would be an absolute dream come true.” Caleb grew up seeing a picture of his dad receiving the Steinmark Award in 1996 and it became a dream to put himself in a position to someday receive this award. Incidentally, that picture was hanging in the home of Grandpa Lou Rillos, a legendary coach at Golden High School and a 1981 inductee into the Colorado High School Coaches Association’s Hall of Fame.

Going into his freshmen year at Ralston Valley High School, Caleb’s chances of being a standout athlete looked as slim as the 5’8”, 140-pound youngster trotting out onto the football field. Knowing that Freddie Steinmark was also a small-statured athlete (5’9”, 155-pounds in college) gave Caleb the motivation to give it his best shot every time he competed for his football, basketball, and lacrosse teams.

Caleb’s hard work and determination helped him grow into a 6’ 5”, 200-pound senior athlete. Family genes played a part in Caleb’s growth, but not just his dad’s. Caleb’s mother, Brooke, was a stand-out volleyball player and female athlete of the year at the Air Force Academy. Matt Rillos played running back for the Air Force football team and Caleb will follow in his parents’ footsteps by attending the Air Force Academy in the fall.

Caleb’s achievements as a student at Ralston Valley are very impressive and his competitive nature stood out in the classroom. “I competed every day in everything. I strived to be the best, and was one of the most competitive kids you would ever see. It wasn’t enough to get good grades, I wanted to get the best grades in the entire class. I wanted to be the kid who set the curve on every test.” This hard worked paid off as Caleb finished with straight-A’s throughout high school and the proud distinction as valedictorian of the Ralston Valley class of 2020. Caleb also joined the 14’er club with an impressive SAT score over 1400.

As a three-sport athlete, Caleb leaves Ralston Valley High School with a glowing list of accomplishments. In football, Caleb was a 1st Team All-Colorado wide receiver, 1st Team All-Conference wide receiver, team captain, Gold Helmet finalist, Gatorade Player of the Year nominee ; in basketball, Caleb was Honorable Mention All-State, 1st Team All-Conference, and 2-time team captain; in lacrosse, Caleb was one of the state’s leading scorers and was primed to lead the Mustangs to a strong spring season in 2020. “I was bummed that our spring season was cancelled,” Caleb commented, “we had a great senior class and were planning on a great lacrosse season this year.”

In his nomination letter, head football coach Matt Loyd commented that Caleb “proved to be an unstoppable wide receiver against man coverage, opponents had to dedicate at least two defenders to have a chance. He possesses the rare combination of size, speed and athleticism but more importantly the dedication to work hard and determination to get better each day. When it was all said and done, he was one of the leaders in the state in receptions, yards and touchdowns.”

Caleb’s active participation in his school and community rounds out his impressive resume. Caleb was a National Honor Society member, Mustang Mentor Program leader, and a youth football camp volunteer during his days at Ralston Valley. He served his community as a Salvation Army bell ringer, a church childcare volunteer, Operation Christmas volunteer, Walking for Water volunteer with World Vision, and Hoops for Hope volunteer sharing basketball with disabled children.

The Steinmark Award was established in 1972 and honors Freddie Steinmark, who excelled in football, basketball, and baseball while attending Wheat Ridge High School in the 1960s. He was also an outstanding student and active in several school and community-oriented endeavors before attending the University of Texas, where he helped the Longhorns to the national football title in 1969. Freddie died from cancer in 1971 at the age of 22. Student athletes nominated for the award must be seniors who have maintained a GPA of at least 3.0 and participated in at least two varsity sports, having earned at least All-Conference in one sport and All-State in another.

The CHSCA Freddie Steinmark Award trophies will be presented to the Steinmark winners as part of CHSCA All-State Games hosted by Colorado State University - Pueblo. The All-State football game is planned for July 17, 2020. Caleb will be joined by Berthoud’s Emily Cavey, who will receive the girls’ Steinmark Award.

In 2019, Kain Medrano of Pueblo East received the boys’ Steinmark and Tess Hornung of Kit Carson was the recipient for the girls.